This is another of my newest pieces, a bronze sculpture of a jack rabbit. It is somewhat stylized with slightly larger ears and eyes. I think it is kind of a fun piece.
It was inspired by all of the jack rabbits at the National Ranching Heritage Center at Texas Tech University in Lubbock.  I will be sending some of these up to Tech for the Summer Stampede Show at the center. This is a great show attended by wonderful people and a percentage of all sales go to support the Ranching Heritage Center.
Posted by Douglas Clark at 5:15 PM No comments:

I have been away from my blog but not from my art. Since my last posts almost a year ago I've had many shows and created lots of paintings and several new sculptures. The next major show I will have work in will be the Summer Stampede at the National Ranching Heritage Center at Texas Tech. I participated in the show last year also.
Posted by Douglas Clark at 8:04 PM No comments:

Spring is a busy time in the  gardener  and the outdoor painter. There is never enough time to do everything. But I have always remembered the words of a preacher that I saw on television. He said that we always have time for what we put first. I try to follow this and group my priorities where they should be . One of the things I always give time to in the spring is painting the bluebonnets. The smell alone is worth going out to a big field to experience. But the pleasure of being outdoors painting with friends in great weather (or even not) is the best part of it. This spring we have painted in the Corp of Engineers Parks around Benbrook Lake on weekends and after work.
The other demand of my time, this time of year, is my yard and garden.  We had a hard winter and some of my shrubbery is still looking very grim, but the roses have been incredible. I have so many colors and different sizes and they have all put on a show. The peonies were really nice also.
Every spring my garden tempts me to get out and paint in it but the pull of the country and the wild flowers always wins out. I do take plenty of photos for later use.
﻿
We had some VERY late freezes and frosts this year. They took there toll on the plums. But, the apples, peaches, and pears are covered with fruit as are the grapes and raspberries. The trick will be to keep the squirrels and birds away later in the spring.
I don't think of apples as doing really well around here but my great grandmother had a tree that produced large crops of green apples. So with that in mind two years ago I purchased two trees and they have grown well. This year they have lots of apples on them.

Besides the fruit trees, I have vegetables and herbs planted in a couple of different places. It takes a lot of watering and weeding to keep it all going.

Saturday was one of the most exhausting and rewarding days that I have had in a while. The days events started for me at 7:00 when I left my house to drive east to Tandy Hills Park. When I got there my friend Carol Ivey was just setting up to paint. Today was Prairie Fest and a group of us were painting there for part of the event. 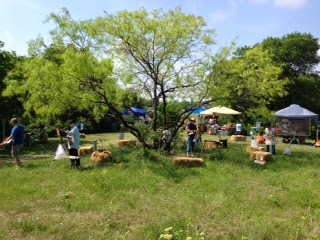 The weather was great. We were joined by several other artists including Claudia Davis, Janice Weaver, Olivette Hubler, Jeff Ott, Dan Spangler,  and others . We turned in our paintings to be auctioned off. (Mine sold.) Then four of us had to head on to the Fort Worth Nature Center and Refuge for a second event, Fort Worth Wild a VIP celebration of the 50th anniversary of the nature center.
﻿
The great weather continued at the nature center. The four of us were joined by the rest of our group including T. K. Riddle, Mary Rabine, Sheri Jones, Tina Bohlman, and Steve Miller. We had painted out there a few weeks earlier so we already each had one painting for the show and were there to paint a second one before the auction that evening. I chose to paint the bison but in a much looser style.

﻿
This event was held for the 50th anniversary of the Fort Worth Nature Center and Refuge as a fund raiser to restore the parks CCC structures. Everyone painted wherever they wanted. Then before the start of the event they set up their easels along the path to the tents where the event was going to be held, and finished their paintings there as the guests walked past.
﻿﻿
It was a little windy but not too bad. There was a huge turnout, over 300 people who each paid $275 to attend. So from the point of view of the artists, exactly the sort of people you want at an art show.
The tents were set up on the site of the CCC structures, on a large hill with great views of the park and lake. There were several tents set up with tables in them where we were going to be eating as well as a tent where the paintings and other auction items were displayed and an area where the caterers were set up. Bonnels of Fort Worth catered the event. The food was delicious. Besides the artists painting along the path my friend Vince Villafranca  did a live sculpture casting in front of the tents.

The location was just perfect for this sort of event.  I saw so many people I knew. It was sort of a whos who of Fort Worth. There was a table set aside for the artists but I was invited to join several groups of friends at their tables. Everyone I talked to said they thought this was a first class event.

The mayor was one of the first speakers. Other guests included local and state politicians and the head of the Texas Parks and Wildlife Department (who was a very funny guy.)  All of the speakers did a great job .The nature center is such an amazing place, over 3600 acres, and they all were effective in expressing what a treasure the nature center is. 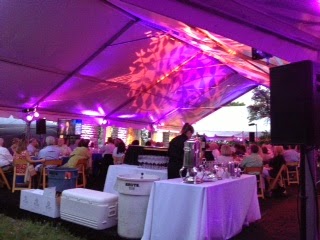 As the night went on the tents were lit with colored lights. And the views of the sunset out of the ends and sides of the tents continued to just get nicer and nicer. Hal Jay from WBAP  was the master of ceremonies and he was so funny as well as incredible in getting the guests to bid more and more on some live auction items including the right to name the new bison bull which went for $10,000.
﻿
Almost every piece of art we created was sold. I sold both of my paintings. The event lasted until after 9:00 . I didn't get home until after 10:00 and I was pretty tired. It had been a great but long day.﻿
Posted by Douglas Clark at 7:46 PM No comments:

As a painter this is one of my favorite times of the year. Many of our wildflowers, including the bluebonnets are at their peak. Plus, the temperature is very nice to be out painting and the mosquitos and chiggers don't seem to be out yet. Like all great times in life, you are aware that it won't last, so the only thing to do is appreciate it while we can. So today after work my friend Sheri Jones and I met to paint near Benbrook. ( Sheri is a real trooper, she is up painting an hour before most people are awake in the morning and today after working all day she was out painting in clothes that looked like she was headed for church; and not a speck of paint on her.) Besides bluebonnets there are so many other wildflowers in bloom. There are also prickly pear, yucca, and mesquite and oak trees with fresh foliage. There is so much to appreciate and enjoy. Hopefully we will have more great days like this before the heat sets in,

Posted by Douglas Clark at 5:14 PM No comments:

Today was Easter and a very beautiful day. I woke up early and went out to Dutch Branch Park to paint the bluebonnets. I didn't see any turkeys this morning but I did see lots of deer, ducks, buzzards, and song birds. The bluebonnets are Getting prettier every day and the other flowers are coming along too. I finished this painting and worked on two others. I didn't paint long but I enjoyed it.

I worked in my yard and then went over to my sister's for Easter lunch with our family. We had a very good dinner, played some games and watched some sports. Then I came back home and did a bit more in my garden before the rains started.