﻿﻿
﻿﻿    Last Saturday, May 11th, Sheri Jones and I both did demos for the Dutch Art Gallery in Dallas. It was a very nice day. I sculpted a bison and Sheri painted a large landscape.
Yesterday, Saturday, May 18th, I went to the Paint the Glen  paint out in Glen Rose. I didn't paint for any length of time because one of my nephews received a baseball award and I wanted to go to the ceremony. My friends Olivete Hubbler, and Sheri Jones both won awards.


﻿
Kent, Carol, and I painted in a 5 acre garden at 4900 Westridge Road. This garden belonged to 12 Spanish style homes of white brick and orange tile roofs. There were multiple ponds, pools, streams, and fountains with swans and ducks.
﻿
The garden felt like a resort full of masses of roses and other flowers and greenery with paths and walkways winding throughout. This had once been the home and sculpture garden of a Texas oil man. He had an incredible collection including works by Modigliani and other artists. The art is gone and there are twelve houses instead of one but it is still a magnificent place.


﻿
I painted from 12:00 to 6:00. I also brought some other paintings. I sold the three 5 x 5 koi paintings above that I painted at Chandor Gardens a few weeks ago.
﻿
The day passed quickly, as days in beautiful places do. I painted one painting (Westridge Roses) and started a second, which I have not finished yet. This was a busy weekend but I enjoyed it all.
Paint Historic Waxahachie is coming up soon and in July I will have a two artist show with Ann Hardy at the Palace Arts Center in Grapevine Texas. The show will feature new works by both of us. I have a lot of painting to do to get ready for this.

Thanks to the Chapman Family

First let me share a plein air painting from a few weeks ago that I reworked a bit in the studio this afternoon. I worked on the values overall, and did a bit more to the bluebonnets. I believe it is a stronger painting now.


Today is one of the days that will live in my memory forever. The Chapman brothers open up their Squaw Creek Ranch, just west of Fort Worth, once a year in the spring for their cattle branding. This is an incredible taste of Texas history, Texas hospitality, and Texas cuisine.

Last year about 400 people from the area came and I'm sure at least that many were there this year. From early in the morning the cooks are busy preparing breakfast for everyone who shows up. Breakfast included, cowboy biscuits, coffee, sausage, bacon, and gravy. (Best biscuits ever!)
Everything is cooked just like it would have been cooked on the old ranches and cattle drives of the past. 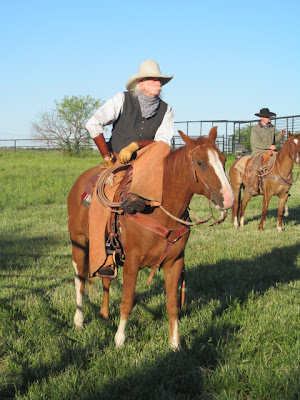 The cowboys from the Chapman ranch as well as those from the surrounding ranches and counties show up to ride in the cattle drive and to lend a hand with the branding.

The cattle are driven in groups from the surrounding pastures and taken to the branding pens. It was  amazing watching the drive and must have been really incredible to ride in as well. I am so thankful that families like the Chapmans are preserving a way of life that was once the norm and is now almost gone.

After the cattle drive the cows and calves are driven into pens where a few mounted cowboys work to separate the cows from the calves. I've been to cutting horse events many times but this was much more interesting seeing it done on a ranch.
Today on most ranches the cattle would be driven into chutes where they could be given their shots, etc.... But here it was done as it has historically been done in Texas. The calves were roped, put down on the ground, branded, tagged, and given shots.

﻿Many of my artist friends were here taking photos for reference material including Sabine Higgins,T. K. Riddle, Olivette Hubler, Janice Weaver, B. J. and Sheri Jones, Georgia Clarke, Linnea Mckinnie and her husband , and Leslie Talty and her husband. My friend Alonso Zamago and his wife also came out. Between us I believe we took thousands of photos.﻿
Many families with children were there. It was just an incredible opportunity for everyone to witness first hand our Texas heritage. Two of the things that I would say surprised me were how much it smoked when the cattle were branded, and how little the branding seemed to phase them. Many of them bawled when they were roped and thrown down, and some when they were given their shots, but I didn't notice any when they were branded.
I guess I also was surprised at how hard the work actually was just to get the calf down. One mounted cowboy would rope the calf around the neck and another around the hind legs. Then other cowboys on foot would try to grab its legs to bring it down. This usually took three or more cowboys. Then the rope was taken off the neck and while the calf was held down other cowboys and cowgirls did their work tagging, branding, banding and injecting. Then the calves were sent back to their mamas. Several cowboys were knocked down, dragged, and kicked.

After the first group of calves were finished it was time for lunch. The Chapmans provided an all you can eat fajita dinner for everyone present. They were the best fajitas I have ever had. The meat was so tender it was just incredible. I can not imagine the cost of feeding so many people, and I don't know of any where else in the state where you can just show up and be fed a delicious home cooked (pasture cooked) all you can eat breakfast and lunch.

After lunch more cattle were driven over and the whole process continued, The only difference was these were larger calves and the work seemed more difficult. It was more entertaining to me than going to a rodeo because these cowboys were doing real work that had to be done, not doing it for a competition, like cutting or calf roping in a rodeo.
We stayed from about 8:00 to after 12:00 and all of us had a wonderful time. Beautiful scenery of pale green spring foliage with bright blue skies and perfect weather. In fact every thing conspired to make this a perfect day for all of us. Thank you to the Chapmans for creating great memories and teaching us all about our ranching heritage. Your hospitality and generosity are truly appreciated.
﻿

Last weekend a group of us went to paint at Prairie Fest at Tandy Hills Park in East Fort Worth. The weather was super, with very little wind, which is a treat at Tandy Hills. This park has plants that are now very rare in this part of Texas including wild foxgloves. ( My friend Sheri Jones painted them.) Other friends there were T.K. Riddle, Olivette Hubler, Hai Chi Lee, Linnea McKinnie, and David Tripp.