After Church today, which lasted longer because our annual parish meeting followed the service, I went back to the Stock Show to sculpt.  There is only one more week left of the show. I have sculpted several longhorns but I wanted to sculpt a different breed of cattle. I walked around the cattle barns for a bit and right away, one bull stood out. It was a large black limousin bulll. He was magnificent looking. 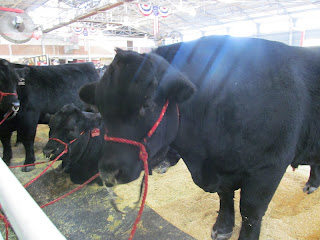 I came in today with nothing but a blob of clay and a wire armature from a previous sculpture. It didn't take long before I realized that I did not have nearly enough clay. I decided that I would try to sculpt half of the bull  in profile so I could capture as much of the important information as I could.

The bull I sculpted is from the Magness Land and Cattle Company in Colorado. His nickname is Bob ( I think his registered name is Xyloid ) I found out that he was selected as the Grand Champion Bull. I guess I know my cattle, because this one actually stood out as being special without knowing beforehand that he had won anything. (My cousins did  raise and show hereford cattle and I had a pet angus cross calf that I raised when I was about seven or eight.) 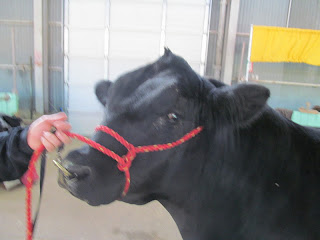 Bob was very docile as he was lead outside to wait to be loaded into  his trailer. I took a lot of photographs, so hopefully I will have enough reference material to finish sculpting him.
While he was tied up outside I pulled up a stool and sat down beside him to sculpt. I had a lot of people come up to talk to me as I sculpted, and I never mind that. It was a warm day and a pleasant way to spend several hours creating art. I've got a long way to go before I am finished, but I do feel I got a good start today and met some very nice people while I worked.

Posted by Douglas Clark at 6:38 PM