Again it has been a great week of art activities so far. Yesterday morning ten of us went to go paint in the Fort worth Botanical Gardens. It was a super morning, there was a great breeze and we had shade. It could not have been nicer.(For some reason my painting photographed lighter than it is.)


The artists who came today were Sheri Jones, Olivet Hubbler, T. K. Riddle, Linda Reedy, Dr. Tom Kelley,Margie Whittington, Connie Michaels, Dan Spangler, and Beatriz Welch.  It was really neat seeing all the work created. Some people painted in oils, one in acrylic, one in water color, one sketched and one took photos.


At about 10:30 some of us went over to another artist's (but not a plein air painter) house for lunch. Maryann White had created an incredible lunch for us including sandwiches, guacamole and other dips, chips, brownies, watermelon, and iced tea. It is always a treat seeing her house. You can really tell it is the home of an artist.

Today I had to drive across a few counties to the west, to the town of Breckenridge to drop off one of my sculptures for an art show at their art center. It was a nice drive west. First I passed through Weatherford, the county seat of Parker County. It has a beautiful courthouse with a clock tower. I took a photo but it didn't turn out. I'm not sure how that happens with a digital camera.


I continued west to Mineral Wells. One of my favorite sights there is the Old Baker Hotel. This was quite a grand hotel long ago when movie stars and the rich came to enjoy the mineral waters. Many well known people stayed there including the Three Stooges. The hotel has been closed for a long time and is in bad repair. I hope some time it will reopen in some form or other.

Like many of our older Texas towns and cities there are some grand  houses, so it is always worth while to drive around a bit if that sort of thing interests you. There are also some old businesses too like the Crazy Water bottling company.
I had lunch at the Black Horse Bakery and Deli. I have to really brag on the desserts. I had the French Coconut Pie. It was so good, I bought a slice to bring to my Mom and Dad when I came back to Fort Worth.


Past Mineral wells the land changes and becomes rougher with larger hills and Mesas. It is one of the nicer parts of our state I think. There are lots of farms and ranches, but not the really big fancy ones like you see in the hill country west of Austin. You don't see as many cattle, sheep, and goats or exotics as you do down there either.

The land is big and open. Sometimes it is flat but other times the road goes up and down or is cut through rocky hills.. I was surprised how green it was for this time of year. This area reminds me of some parts of New Mexico. There are lots of cedar trees, prickly pear cacti and yuccas. 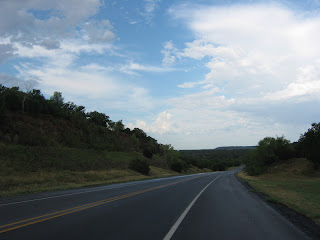 Highway 180  Winding Through the Hills

As I continued west I came to the town of Palo Pinto. This is the county seat for Palo Pinto County. It is  a fairly small town. Many of these towns once had beautiful old courthouses with clock towers built in the late 1800s. But, a lot of them tore down these in favor of larger more modern looking court houses. Palo Pinto used some of the stones of their old courthouse in the new one. (Not that it is really new, I think it was a WPA project during the Great Depression.)

From there I continued west to  Breckenridge the county seat of Stephens County. The town itself like most west Texas towns has a certain feel to it. The people I met at the art center and in the post office where I dropped off a letter, could not have been any nicer. From them, I was left with a very favorable impression of the town.  Sadly like a lot of these older places, many of the local businesses appeared to be closed in Breckenridge.
The court house is a nice looking building that was built when oil was discovered in the area.Oil was very important to this region and  in fact it looks like there was an old oil well right across the street from the court house. 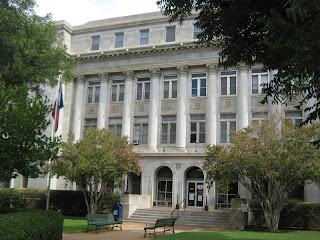 The court house at Breckenridge

One of the neat things they did here was leave a bit of the old courthouse. The new one looks nice but I think I would have liked the old one better. Many of the county seats  around Fort Worth  including Weatherford, Waxahachie, Granbury, Glen Rose, and Hillsboro still have their old court houses and they are very beautiful. Our own Tarrant County court house in Fort Worth is really special. I have shown photos of it and the Waxahachie and Glen Rose court houses on some of my other blogs.

Posted by Douglas Clark at 4:27 PM